Who doesn’t love a crisp, crunchy biscotti? Commonly enjoyed with coffee or another hot beverage by those all over the world, biscotti is widely available in a variety of tasty flavors. Here at Italian Bakery of Virginia, we like to stick to the classics. Using old family recipes and only the finest ingredients, our experienced bakers handmake each batch of biscotti to perfection.

But where did the idea of biscotti come from? A tasty treat that’s signature dry, crunchy texture comes from a twice-baked cooking process—who was the first to attempt this and why?

The history of biscotti and the Roman Legions

Much like the origins of fruitcake, biscotti was first created to be a long-shelf-life food for Roman Legions to carry during lengthy battles. Because biscotti was intentionally rock-hard in texture, there was no risk of it becoming stale or inedible, and the original almond flavoring gave much needed nutrients to the soldiers. While almond is still a popular flavor option for today’s variation, we think it’s safe to say biscotti has come a long way since the Roman age. Over time, the rock-hard treat has evolved into less of a means to an end and more to an after-dinner indulgence.

Biscotti After the Fall of Roman Empire

After the fall of Rome and the country’s repeated invasions, Italians endured what is commonly referred to as “the Dark Ages,” throughout which they did their best to simply survive. As such, there wasn’t much culinary growth until the Italian Renaissance. It was then that Tuscan bakers took the age-old biscotti and transformed it into something that could be enjoyed rather than tolerated. This was much like the biscotti we enjoy today, though Tuscans preferred to dunk their biscotti in a local sweet wine known as Vin Santo rather than a cup of cappuccino.

What’s the difference between biscotti and cantucci? Ultimately, nothing but a name. As the birthplace of biscotti (as we have come to know and enjoy it), Tuscany and the small city of Prato within it (where almond groves are abundant—hence the traditional almond flavor) refer to this twice-baked cookie as cantucci. To Italians, the word biscotti is just a generic term for any type of crunchy cookie. At the end of the day however, if a Prato native strolled into the Italian Bakery of Virginia, they would point to our display of biscotti and ask for a cantucci. No difference.

No matter what you call it, what your flavor preference may be, or whether you enjoy it with a cup of coffee or a glass of Vin Santo, one thing is for certain. Biscotti is a delicious treat that has withstood the test of time. Stop into the Italian Bakery of Virginia and pick up one in every flavor today!

There’s no doubt about it—fruit cake is a staple of the holiday season. While it has spent centuries being the butt of countless jokes and often gets a bad rap, we here at Italian Bakery of Virginia still love it – and so do millions of people around the world. No matter which side of the spectrum you fall on, chances are you’re likely to find fruit cake adorning the dessert table of at least one holiday party this year.

So, what’s the history behind this love-it-or-hate it dessert and how did it become a holiday staple? Let’s take a closer look.

The origins of fruit cake

Let’s start from the beginning. Fruit cake dates all the way back to ancient Rome, when mashed barley, pomegranate seeds, raisins, and pine nuts were combined to make a dessert called satura. Valued for its long shelf life, Roman soldiers often brought the treat with them to battle. Later in the Middle Ages, spices, honey, and dried fruit were added, aiding in its growing popularity amongst crusaders. Over time, ingredients from European colonies were added, including sugar, candied fruit from the Middle East, various spices, and liquor, giving us a version of the treat that is most similar to the fruit cake we see today.

Because of the introduction of candied fruit, and of course, the abundant use of sugar for preservation, fruit cake became such a “sinfully rich” treat that it was briefly banned in Europe in the early 1700s. Fortunately, the ban was later lifted and fruit cake became a popular treat during celebrations throughout Europe and a must-have addition to a proper Victorian tea spread.

Synonymous with the holiday season

It is believed that one of the main reasons why fruit cake became associated with the holidays was that during the 18th and 19th century the cost of the ingredients was too expensive for most households to afford. Considered an indulgence, fruit cake was thus reserved for special occasions and holidays. As time went on, others began to credit Truman Capote’s 1956 short story, “A Christmas Memory,” which became most interesting when the older woman in the narrative looked out her window and exclaimed that it was “fruit cake weather.”

Regardless of whether fruit cake is a must-have addition to your own annual holiday spread or you’re simply curious about this seasonal commodity, Italian Bakery of Virginia ships fruit cake all over the world. Our delicious Italian fruit cake blends candied fruits, crunchy nuts, and a hint of liquor to create a homemade holiday treat the whole family will enjoy. Order online today to have one delivered straight to your home! 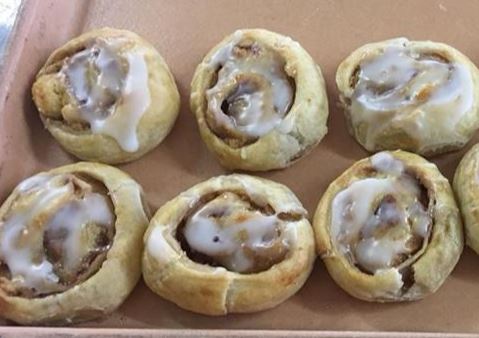 The leaves are starting to change and the temperatures are starting to drop which can only mean one thing: fall is upon us. Fall is one of the best seasons to enjoy homemade baked goods and Italian Bakery does not disappoint.

The Italian Bakery offers a variety of seasonal specialties through the autumn months all of which offer the familiar tastes of fall.

Here are a few of our favorites!

A twist on the original sugared doughnut, this sweet snack goes well with a cup of coffee, or even better, with a group of friends. Bring a batch of them to your next fall picnic or seasonal party today!

These are two of our all-time favorite cakes: a pumpkin cake and carrot cake, finished with cream cheese. The cream cheese frosting gives the cake a sweet, delectable taste, that anyone can enjoy on these seasonal favorites.

And what would fall be without the sweet taste of fresh, seasonal apples? Our apple nests are pastries that are layered with an irresistible cinnamon and apple swirl, perfect for any occasion.

Our apple strudel has a flaky dough that covers sugared apple slices in a combination that has been delighting customers for generations. At the Italian Bakery, we offer a “take and bake” version of this timeless classic, which allows you to take the strudel home frozen and bake it at your own convenience, filling your home with sweet scents of fall. It’s perfect for a last-minute dessert idea if you’re unexpectedly invited somewhere. Please keep in mind that these must be ordered in advance if you’re hoping to have an apple strudel on hand.

All Italian Bakery’s pastries are made by scratch with the freshest ingredients. Today, our customers keep coming back for a taste of our world-famous potica, our Italian fruit cake, our crisp, crunchy biscotti, and a variety of other delectable pastries including our fall favorites. 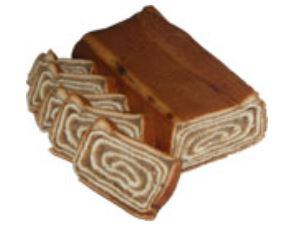 Potica is a traditional Slovenian cake, typically served on special occasions and holidays.

Potica has been pleasing people and taste buds for centuries, serving as a main dessert dish in many celebrations.

The dough for potica takes quite some time to prepare but after it has risen, it is typically filled with either sweet or savory fillings. Common fillings include walnut, tarragon, honey and even bacon. It is created by flattening the dough, adding the ingredients, and then wrapping the dough and shaping it into a loaf. The process gives potica delicious layers that resemble a marbled cake.

Here at Italian Bakery of Virginia, our traditional potica bread is the heart of our bakery. Back in 1965, we received a traditional Slovenian family recipe for potica, and it has since become one of our most requested and best-selling cakes. We’ve added in some spices over the years to create a truly unique blended delicacy that our customers keep coming back for.

We begin the process of making potica with all-natural and fresh ingredients. Baking potica each day is a time-consuming project, as it requires the careful hands of a proficient baker. The dough is carefully hand-rolled, pulled and stretched to create a traditional potica consistency. We then add in crunchy walnuts, creamy butter, brown sugar, vanilla and a variety of other spices. The potica is then baked and sliced for serving.

Our most popular flavors are walnut and walnut-raisin. Both of these flavors honor the classic recipe of this bread, with a touch of sweetness. When potica first originated in Slovenia, the ingredients often told the story of the family baking it. Only wealthy families could afford expensive fillings such as nuts and cream and poorer families could typically only afford to include herbs from their garden.

To honor your Slovenian heritage, or to start a new tradition in your family, celebrate life’s milestones, holidays, and good fortune with fresh potica.

At the Italian Bakery of Virginia, we’ve ensured that the time-honored art of making potica has not been lost. Visit our website here.

Please come back to check out our future blog posts!